‘Come in cats and check your hats, I mean this joint is jumpin’….

A rare, recent, glimpse of spring sunshine finds me groping for a glass of something sunny, and Patrick Sullivan’s ‘Jumpin Juice’ gets the roof rocking’ and the neighbours knockin’.

Guaranteed to lift the most jaded of spirits, and awaken those blue winter palates deadened by too much Malbec!

Raspberries, mulberries, a bunch of blackberries and a fistful of cherries.  Whole bunch fermented, neither brand nor bland, it’s the kind of cloudy, savoury and vibrantly beautiful giggle juice that Jean de Florette would have guzzled on his endless trips to the cistern, and although this is a wine of Victoria’s Yarra Valley, it dances to the tambourin of Provence.

Pinot Noir, with a dash of Pinot Gris, picked and blended at the same time then fermented with natural yeasts – they drop their singular personalities and meld into a true vin de soif  – unfined and barely filtered, light in colour and body, tense, nervy, minerally, oozing with juicy fruit and best lightly chilled, this is just ridiculously easy to drink.

Just what is it, that causes even the most robust of hearts, to flee in the face of a fizzy red?

Is it the frothy, foaming, cherryade top? The soft, squishy, whiff of summer pudding? the slightly edgy tannic grip? or simply just a fear of the unknown, together with a lily- livered aversion to risk taking.

Back in the day, when be-pinstriped dinosaurs roamed the earth, Sparkling Shirazwas a hard sell, hand sell, kind of wine – it still is – but that’s not because of it’s quality.

I first tried Sparkling Shiraz, in the Barossa at Rockford – early in the morning, with a large plate of bacon and eggs – and if that’s not swashbuckling enough, there’s nothing madder, badder and more deliciously dangerous with a barbie – not the doll!

In a wine world awash with the dull predictability of poor quality prosecco and pinot grigio, a sense of adventure is sorely lacking.

After a swim across the Hellespont, George Gordon, Lord Byron – ‘Roll on, thou deep and dark blue ocean – roll’ – and his old mucker Edward John Trelawny, would quaff foaming tankards of fizzy red  – because as Mary Shelley once said ‘Trelawny lives with the living, and we live with the dead’

Fill your fist with a large one, and sing …. 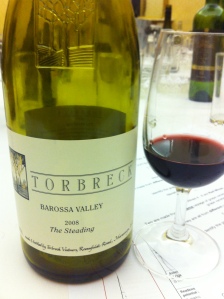 I know its Keats again, but I am indebted to the late Robert Hughes for the reminder from “Things I didn’t know”. Necessity being the mother of invention, I needed a title to introduce this piece on Australian wine. Now I haven’t written anything remotely creative lately (apologies to my loyal, but miniscule, band of followers) as I have been building a website, the creation of which has been – in the words of another great Aussie, Alan Moorehead – akin to “straining s..t through a sock”. I am not a natural when it comes to web design and the stultifying ennui coupled with the wet and dreary climate finds me, like Keats, “in need of song and sunburnt mirth”.

Its always a pleasure to drink big robust Aussie reds on a cold Autumn day and I may have killed two of them off a little early but hey, I needed cheering up. The Armagh Shiraz, Jim Barry, 2005, was intense on the nose, with cassis and blackberry fruit enveloped in rich, chocolate and liquorice with a lick of classy, new, French oak. I detected a touch of mintyness as well, but this was soon overpowered by a deep, toasty, overtone which followed through to the palate. Hugely concentrated with  intense, damson fruit, well integrated and surprisingly ripe tannins – despite all the new oak – and a finish that went on as long as the final hobbit hugging scene in Return of the King.

The Garlands Saros, 2003 was a complete counterpoint, and I should have tried it first as it was almost overpowered by the finish of the Armagh. Elegant in style with a nose of fresh, red berries and summer fruits together with a touch of earthy, green pepper, it was an absolute pleasure to drink. Lushly fruited – mainly Cabernet Franc with a judicious dash of Cabernet Sauvignon – with fine grained tannins and high quality, French oak adding to the warmly interesting and stylishly medium-bodied finish.

Henschke’s Hill of Grace is an absolute classic, and The 2004 was scrumptious. Personally I would rather kill wines off early than keep them until they are tired, but this could go on for another decade. Totally fabulous on the nose, a big, unashamed whiff of overripe, plums with traces of violets and herbal scrubland. Weighty, yet elegant, on the mid-palate with blackberry jam, spicy, white pepper and sage to the fore. Oak integration was very stylish and the combination of tightly grained French, with a little sweet American, rounded out and helped finish the wine beautifully. The alcohol level of 14% abv was almost imperceptible (unlike the Armagh) and the overall impression was one of concentration, intensity and class.

Some of you will notice that I began with a shot of one of Dave Powell’s wines, but the call of the website is too strong, and the family must be kept from the workhouse.