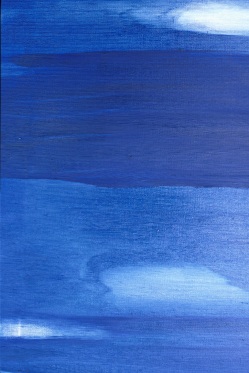 Twas on the sea aa spied him.

His grave it is green but not wi’ grass

And thou’lt never lie aside him”

“There is a rapture on the lonely shore,   There is society where none intrudes, By the deep Sea, and music in its roar…….

Roll on, thou deep and dark blue Ocean–roll!   Ten thousand fleets sweep over thee in vain; Man marks the earth with ruin–his control Stops with the shore; upon the watery plain ……..

He sinks into thy depths with bubbling groan, Without a grave, unknelled, uncoffined, and unknown “. 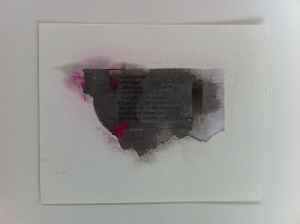 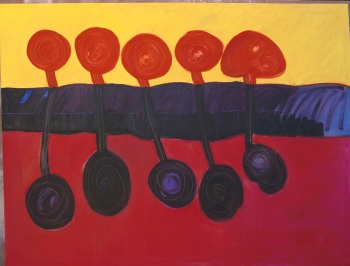 “The challenge for any visual artist is to relate the process of seeing with the process of making; it takes time and effort to make the hand and eye work together in this way”

“Artists are not born or made; they are born and unmade. Paintings might line the walls of pre-school classes, but as one goes up the age range, art disappears from the educational system”

Julian Spalding “The Eclipse of Art” 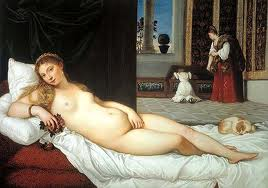 Its loveliness increases…..” I know that Keats wasn’t talking about wine, or indeed art, in Endymion – but he could have been, couldn’t he? The wine trade is fond of its suggested parallels with art, books such as: “The Art of wine”, “The Art and Science of Wine”, “The Winemaker’s Art”, all imply that an appreciation and understanding of both, are indicative of good taste. Add their respective histories together with the prefix “Fine” and who could argue? Is wine art, or artisanal – lets give it a little test.

This is art appreciation at its most basic. The enjoyment of looking at something, just for what it is, allows art to be easily assimilated into popular culture. Apply this to wine and we may say that many wine labels are aesthetically pleasing and that a great deal of wine is bought on the sight of the label alone.

Therefore it can be stated that both Titian’s “Venus of Urbino” and Some Young Punks “Passion has Red Lips” fit the statement. I am not dissing either when I say this.

Art has, at its most minimal, a four step programme, obviously there is a great deal more to art criticism than this, but we need speed and flow. Description: Stick to the facts, who made it, what is the subject, when was it made. Now we can enjoy it without context, to contextualize it more we need to ask how it was made. Analysis: We are still collecting facts, but now we must pay attention to the core elements such as line, shape, form, colour, texture, proportion, balance, rhythm, pattern, recognition. It is easy to apply this analysis to wine so I wont patronise you by pointing out which analytical elements could apply – see earlier post BLIC. Interpretation: What is happening, what is the artist trying to say? Be creative, don’t be afraid, this is the fun part. Judgement: Give an opinion, does the work, or wine, succeed or fail? Honesty is essential here, how to you feel about it and are you finished. 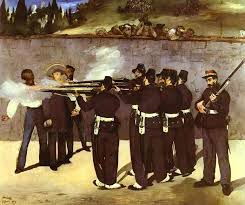 This is an oil painting, probably 19th century (you can tell by the uniforms) entitled ” Execution of the Emperor Maximilian”. The painting is in three distinct sections reading from left to right, three figures on the left, a group making up the central section and a figure on the right for compositional balance. Two of the figures on the left have dark skin, white shirts and no hats, the central figure has pale skin and is wearing a sombrero – we can safely assert – with reference to the painting’s title that this is Max.  The firing squad, making up the central third, have their backs to us – in homage to Goya’s “Third of May” – thereby ensuring their anonymity and absolving them from blame – they are the blunt instrument. The figure on the right is facing us and calmly loading his gun.

A little more info on the piece: Maximilian was a figurehead, in name only, of the Second Mexican Empire, and appointed by the Emperor of France Napoleon III. He was executed, along with two of his generals, when the French troops pulled out in 1866/7 – Manet painted it in 1868/9, after the fact. The controversial element is that not only was the execution seen as unjust, but could have been construed as murder. The figure on the right of the painting is a direct likeness of Napoleon III, inferring that it was he (by loading the gun) who sanctioned the death of Maximilian. We the viewers are culpable because we bear witness to this atrocity but do nothing.

Is it aesthetically pleasing? Probably not. Is it successful? Most certainly. 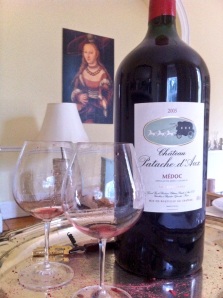 This is a red Bordeaux, Ch Patache d’Aux, 2005. The label shows a disproportionately large black carriage or stagecoach (patache), drawn by three small white horses – in ancient Egyptian profile – stylised to imply six. The bottle is large, a double magnum, with two glasses – possibly Austrian (like Maximilian) – all are situated on a silver plated salver with a small corkscrew to the left. In the background there is a reproduction of a 16th century artwork, of Germanic origin, and a lamp with a base of Asian provenance. The wine in the bottle had a deep purple core showing minimal browning towards the rim. Dominated by Cabernet Sauvignon, at around 70%, the wine showed pronounced cassis fruit with some lighter hints of strawberry and cherry, wrapped in a light pullover – not cloak – of velvety oak (only 25 -35% of the barrels are new). It was judged an extremely attractive wine, ready to drink – if accompanied by food – with ripe and very accessible tannins. Well balanced and delicious – good rather than great – it is now sadly gone, only the bottle remains.

Aesthetically pleasing? Of course, its a great package. Successful? As a cru bourgeois definitely.

Where am I going with this? Much as I love art and wine I do not consider them synonymous. Some attributes may be considered similar, but art can reflect and bear witness to events, whereas wine may only accompany such events and serve as an aide memoire. Whilst I have talked of beauty, I have failed to mention further aesthetic criteria such as: truth, genius, civilisation, form, status and taste. Status and taste may certainly be applied to wine – the former is a prerequisite in wine snobbery, the latter is learned and remembered. This leaves connoisseurship, the specialist knowledge or training related to an understanding of taste, the word comes from the French word conoistre meaning “know”. When studying anything beyond a basic level, a specialist vocabulary and a deep knowledge are essential. These should never be used as a means to exclude others, after all, they may like what they see on the surface.

“In painting, space and form are not actual, but illusory. Painting, indeed, is essentially an art of illusion; and “pictorial science” is simply that accumulated knowledge which enables the painter to control this illusion, the illusion of forms in space” –Patrick Heron. Painter as Critic

“If you see a tree as blue, then make it blue” – Paul Gauguin. 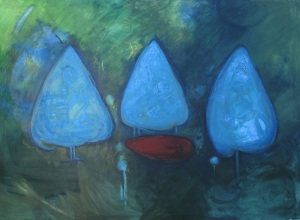 Small works are a counterbalance to large works – in that the process of working is completely different. My larger works (mostly derived from “real” sources such as landscapes and seascapes) have to be initially drawn on the spot, coloured and then scaled up in the studio. The scaling up is a test, causing you to go from “live” sketches and photographs to larger preparatory drawings and compositions – these larger drawings are where the “tightness” of the composition often fails. The colour relationships have to be spot on, seemingly instinctive, and, for me at least, must come directly from the source material. Each colour represents an object, view, or shape encountered on the journey – they are seldom realistic. Classical music or opera is the only accompaniment – as any other music alters the tempo at which I paint.

Small works on the other hand are faster and I can listen to jazz when I make them. The source material is randomly selected, often coming from cut out images collected over a period of time. I choose these images merely because I like them – I have no idea what they may be used for and store them for future reference – accessing them as the work evolves. The subject matter may be equally random, often coming from text, words or phrases. I limit myself to the number of images used, a maximum of ten and a minimum of two. I push the images around on a blank piece of paper, to test the composition, and then begin.

Large works are time consuming. You have to prep a lot of paint – it must be the right colour and depth of colour – especially if its to go on in glazes. There is a comparison with surfing here – “How did you make that connection” – I hear my wife ask. Well, time bends (ref:  Mihaly Csikszentmihalyi, positive psychology “Flow”) when I paint. It is the same as being in the ocean. I am, for the time being at least, no-ones husband, father, son etc., I am totally in the moment. This is getting esoterical, so I will  rein things in. Any reverie or freedom, however  fleetingly experienced,  is usually broken by a text message from my wife.

The V.O.R – or Voice Of Reason, as she prefers to be called -disturbs me ( like the rent collector from Porlock  cut short Khubla Khan) and reality returns with a resounding bleep “get bread”, get milk”! 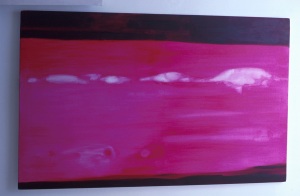 Many of my collaged artworks are rapidly put together. Decisions made are often instinctive, line, tone, form, colour and composition all mesh into one. I often don’t question the images, I just make stuff – accepting or rejecting them as they are created.

Drawing, on the other hand – particularly observational drawing (old styley) – takes time. You can lose hours this way, but occasionally need to prove to yourself that you can still do it. 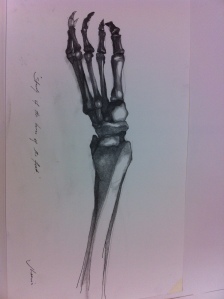 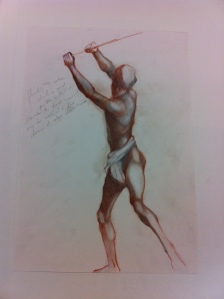 If you find yourself in an art gallery, take the opportunity to get behind the scenes. The easiest way to do this – for the uninvited – is when building work, refurbishments or re-hangs occur. Walk purposefully into areas with limited or denied access and “find stuff”. The stuff that you find is generally un – curated, often extremely interesting, showcasing artworks that are overlooked in mainstream shows. Drawings are particularly revelatory. Oh, and if you are discovered (rummaging I mean – not artistically) pretend you are visiting the country (do remember which country/museum/gallery you are in) and apologise profusely! Alternatively, set up an appointment to view. Artfolk are, generally, shy, solitary souls. Genuinely surprised when you take an interest, and universally accommodating. 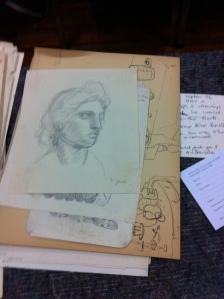 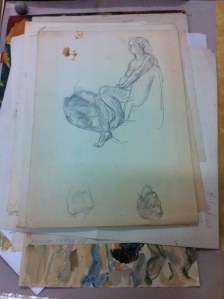 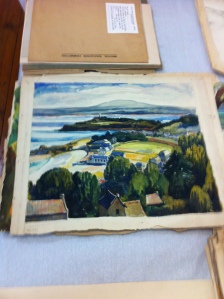 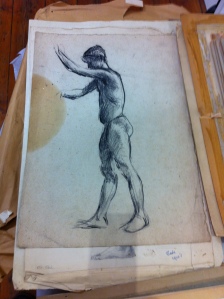 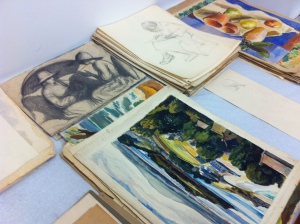 “My recent works are made up from images that I collect and store for future usage.They are a combination of the drawn and found”. 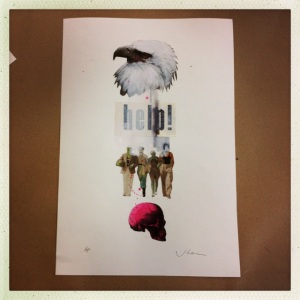 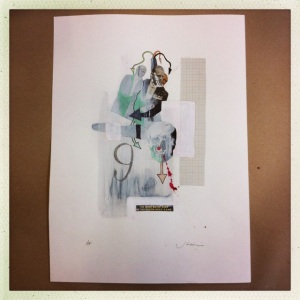 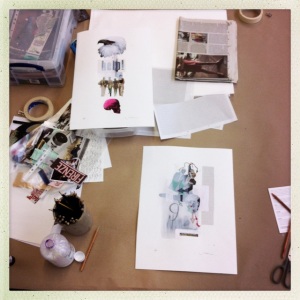 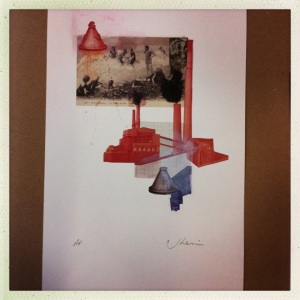